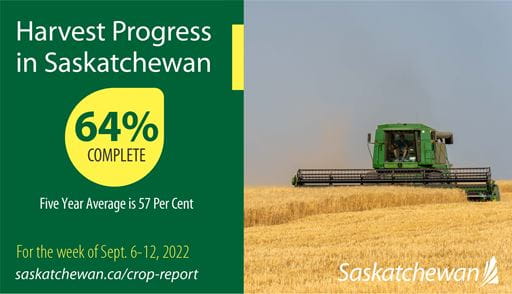 Ideal conditions over the past week allowed for producers across all regions in the province to make immense progress with harvest. Sixty-four per cent of the crop has now been harvested, up from 42 per cent last week and just ahead of the five-year (2017-2021) average of 57 per cent. An additional 20 per cent of the crop is ready to swath or straight cut. Many producers in the southwest and west-central regions have completed harvest and are on to other field work. There are concerns regarding soil moisture and a good soaking rain post-harvest would be ideal, as soil is drying out across the province after several weeks of minimal precipitation, wind and hot weather.

Most of the province received very little to no rainfall this week. The Livelong, St. Walburg and Meadow Lake areas received a range of two to five mm which did not result in major delays.

The majority of crop damage this week was due to light hail, wind and dry conditions. Frost was reported from the southeast up into the northwest; damage is not assessed yet as some areas received more severe frosts than others. Strong winds have continued to blow swaths and shell out crops. There were also reports of damage caused by wildlife and waterfowl as they make their way south.

Producers are busy combining, swathing, hauling bales and moving cattle. Post-harvest activities are well underway in some regions. Producers are noting that many areas are too dry to consider seeding winter cereals.

A complete, printable version of the Crop Report is available online at https://www.saskatchewan.ca/crop-report.