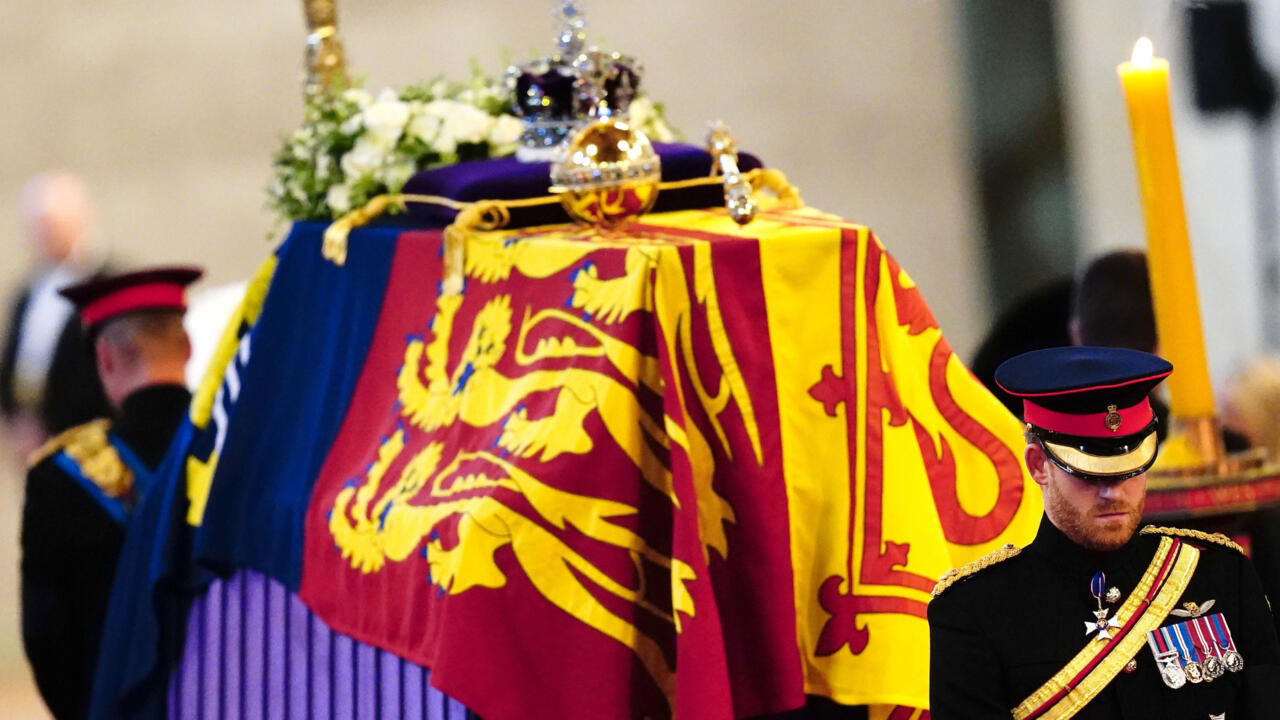 London (AFP) – Britain was gearing up Sunday for the momentous state funeral of Queen Elizabeth II as King Charles III prepared to host world leaders and as mourners queued for the final 24 hours left to view her coffin.

The first members of the public were already camping out in advance to catch a glimpse of Monday’s grand farewell at Westminster Abbey, which is expected to bring London to a standstill and be watched by billions of viewers worldwide.

US President Joe Biden flew in late Saturday, one of dozens of heads of state arriving as Britain stages its biggest-ever policing operation around the historic funeral for its longest-reigning monarch.

The death of Queen Elizabeth aged 96 on September 8 after seven decades on the throne has sparked an outpouring of emotion that has seen hundreds of thousands of people flock to see her coffin lying in state at the British parliament.

Those wanting to view the flag-draped casket have until 6:30 am (0530 GMT) on Monday to make it into the cavernous Westminster Hall.

Mourners have faced waits of up to 25 hours as queues have snaked for miles along the River Thames. Admission to the line looks set to be closed at some point on Sunday.

IT worker Shaun Mayo, 27, was among those relieved to have made it to Westminster Hall after queuing for 14 hours to pay his respects.

“It was incredibly emotional. She was like the nation’s granny,” he told AFP.

A man who was arrested after leaving the line of people filing past the coffin and approaching the casket on Friday has been charged with a public order offence, police said late Saturday.

Muhammad Khan, 28, from east London, was charged with behaviour intending to cause alarm, harassment or distress and will appear in a London court on Monday.

As mourners streamed by on Saturday evening, Prince William and his estranged younger brother Prince Harry led the queen’s eight grandchildren in a 12-minute vigil around the coffin.

Harry — who did two tours with the British Army in Afghanistan — wore the uniform of the Blues and Royals cavalry regiment in which he served.

The move appeared to be the latest olive branch offered by Charles towards his youngest son after Harry and his wife Meghan, now living in California, accused the royal family of racism.

No longer a working royal, Harry, 38, was stripped of his higher-ranking honorary military titles. The vigil will be the only time he will be seen in military dress at royal ceremonial occasions.

The king and his eldest son William, the new heir to the throne, had earlier surprised those standing in line along the Thames riverbank by staging an unscheduled walkabout to shake their hands and thank them for coming.

Queen Elizabeth’s state funeral, the first in Britain since the death of her first prime minister Winston Churchill in 1965, will take place Monday at Westminster Abbey in London at 11:00 am (1000 GMT).

While the leaders of the European Union, France, Japan and many other countries will attend, those of Russia, Afghanistan, Myanmar, Syria and North Korea were not invited.

Charles — at 73 the oldest monarch ever to ascend to the throne — will host the dozens of visiting dignitaries including Biden at a reception at Buckingham Palace on Sunday evening.

Leaders including Jacinda Ardern of New Zealand, Australia’s pro-republic Anthony Albanese, and Canada’s Justin Trudeau — prime ministers from countries where Queen Elizabeth was head of state — have paid their respects at Westminster Hall.

“In this time of great grief, we are thankful to be here paying our respects to The Queen for her services to duty, faith, family and the Commonwealth,” Albanese said on Twitter.

Trudeau said Queen Elizabeth “served for her entire life, and bore the weight of her duties with impeccable grace”, after signing the book of condolence.

Biden was expected to visit on Sunday to bid farewell to the monarch he said had “defined an era”.

The influx of dignitaries — along with that of hundreds of thousands of mourners from across Britain and around the world — poses an extraordinary challenge for Britain’s police.

More than 2,000 officers have been drafted from across the country to help Scotland Yard.

After the funeral, the queen’s coffin will be transferred by royal hearse to Windsor Castle, west of London, for a committal service.

That will be followed by a family-only burial in which the queen will be laid to rest alongside her late husband Prince Philip, her parents and her sister.

Britain will hold a minute’s silence at 8:00 pm (1900 GMT) on Sunday to reflect on the “life and legacy” of the queen ahead of her funeral.

But some mourners have already begun gathering along the route in central London to make sure they have a front-row spot for her funeral procession.

The culmination of decades of meticulous planning, it will see 142 sailors pulling the gun-carriage bearing the queen’s lead-lined coffin.

“We wanted to have a good spot to see the procession,” said Bill Parry, 59, a Royal Navy veteran as he waited in camping chairs with two other former servicemen.

“It’s not much to ask to sleep outside considering everything the queen did for us: 70 years of duty.”

The funeral will bring to an end 11 days of national mourning across the United Kingdom that has seen the personal sorrow of the royal family play out in the glare of intense international attention.

Camilla, the new queen consort, was the latest royal to pay tribute as she remembered her mother-in-law’s smile and “wonderful blue eyes”.

“It must have been so difficult for her being a solitary woman” in a world dominated by men.

“There weren’t women prime ministers or presidents. She was the only one so I think she carved her own role.”