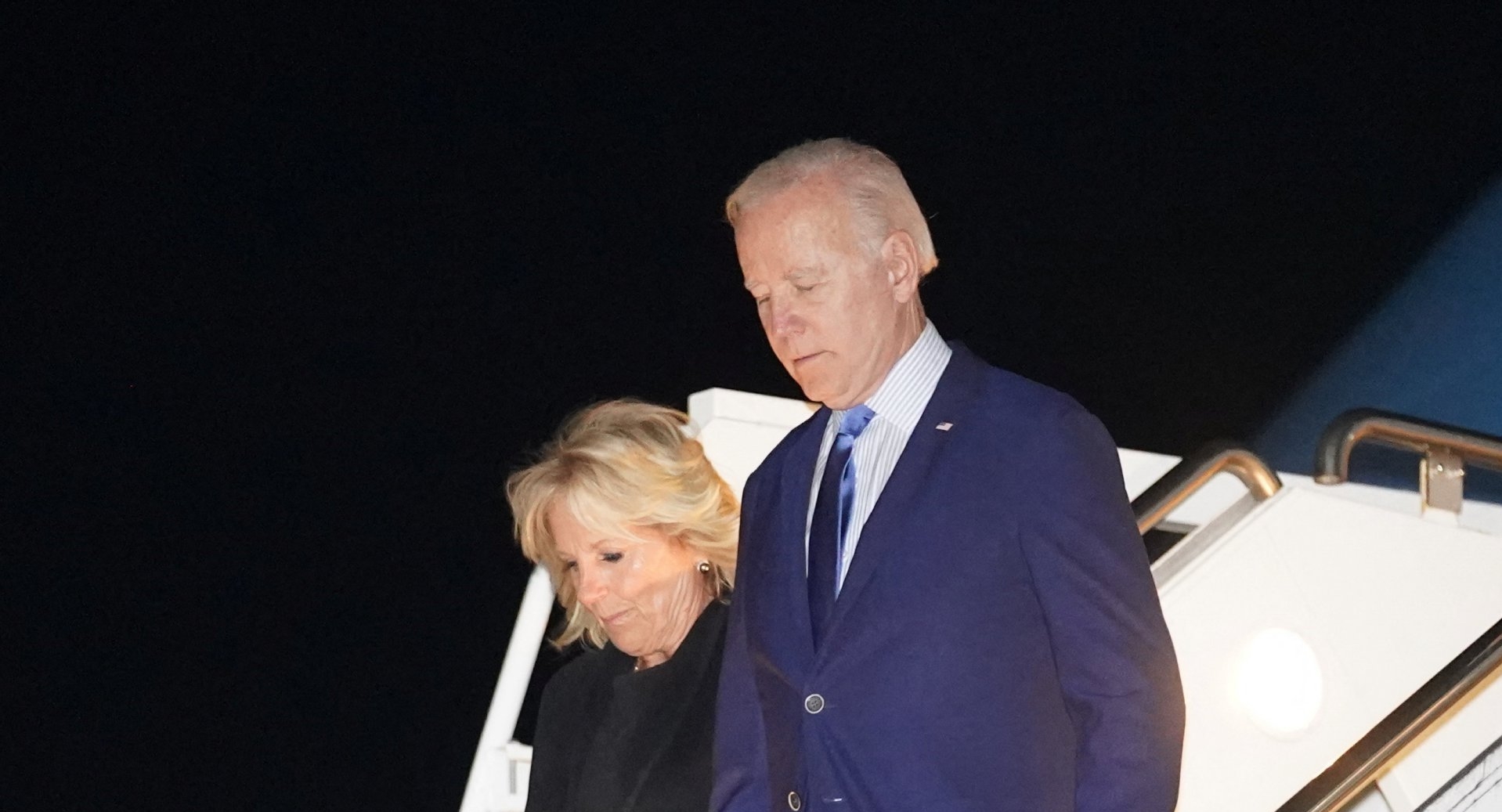 
US President Joe Biden and his wife Jill landed in the UK this evening (Saturday, 17 September), ahead of them attending attend the Queen’s funeral on Monday.

Mr Biden landed in Stanstead Airport in Essex on his Air Force One jet just before 10pm and is now believed to be heading to the US ambassador Jane Hartley’s residence in London on his private UK-based helicopter.

The couple were greeted by a small party as they stepped off the plane, which included Mrs Hartley, a representative of Foreign Secretary James Cleverly and Jennifer Tolhurst, the Lord Lieutenant of Essex.

The chopper is expected to take Mr Biden to the Winfield House in Regent’s Park after special dispensation had been given for the US President to fly over central London by the Government.

The US leader, who took off from Maryland in the US earlier today, is one of 100 world leaders who are attending the funeral.

Sources from the US Embassy sources in London told i that US leader will have “the usual security for a President travelling abroad”.

On Sunday the pair, who met the Queen at her Windsor Castle home in June 2021,  are due to pay respects to the late sovereign, whose coffin is lying in Westminster Hall.

They will later sign an official condolence book and attending a reception hosted by King Charles.

Mr Biden is set to arrive at the state funeral with his wife in his armoured Cadillac.

He is expected to be guarded by around 400 secret service officers and not be forced to travel with other world leaders on a bus from a secure site in West London to Westminster Abbey on Monday.

The US president previously described the Queenas “more than a monarch” and a woman who “defined an era”.

A planned meeting between Liz Truss and the US leader Biden before the Queen’s funeral on Sunday has been cancelled, Downing Street has said.

No 10 said a “full bilateral meeting” between the PM and Mr Biden would instead take place at the UN General Assembly on Wednesday.

It is thought holding the talks after the period of national mourning would allow more wide-ranging discussions.

Downing Street would not provide further details on why the meeting with Mr Biden had been cancelled.

This weekend’s talks are being framed by No 10 as chats, rather than formal bilateral sessions, with politics likely to feature.

The meeting with Mr Biden would have taken place against a backdrop of disputes over the Northern Ireland Protocol and difficulties working towards a trade deal with the White House.

The leaders will instead have their first in-person talks when Liz Truss takes her own trip across the Atlantic to New York for the 77th session of the UN General Assembly next week.