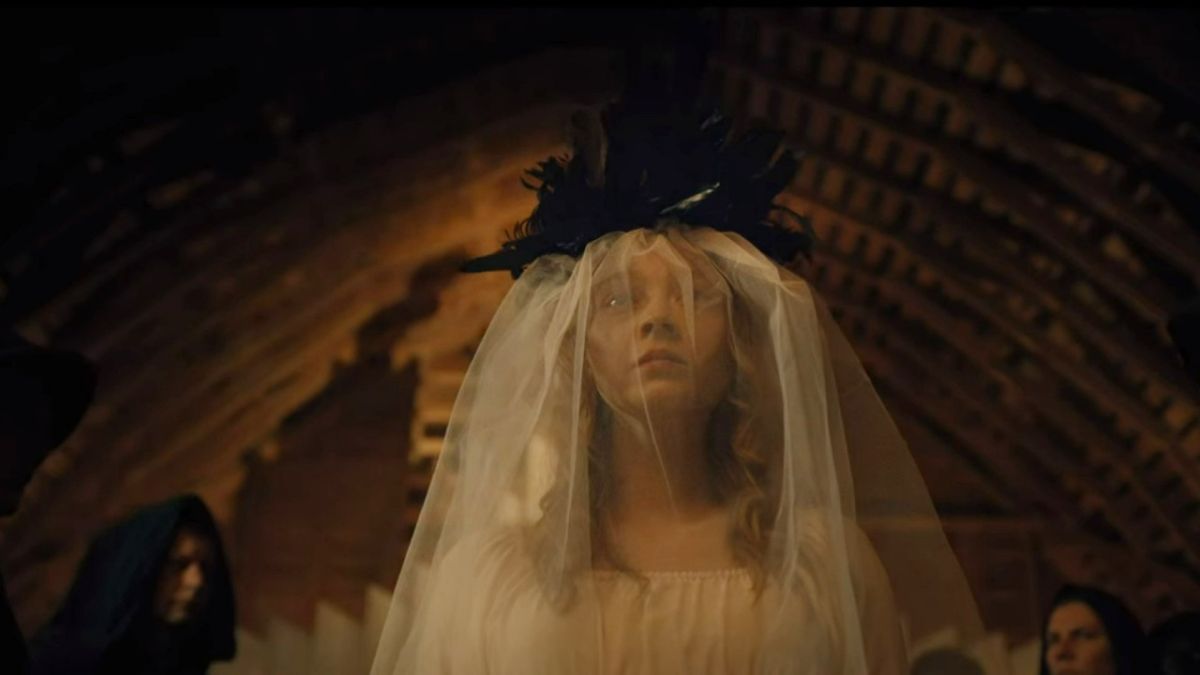 
Netflix’s stellar catalog of limited series often involves shows with intriguing mysteries. Devil in Ohio falls within this category. It’s also one of the best Netflix shows to watch right now. The show follows hospital psychiatrist Suzanne Mathis (Emily Deschanel) as she invites a mysterious teen into her home. Once Mae (Madeleine Arthur) enters the Mathis home, the family’s shaky foundation begins to completely crumble. This leads to a must-see Devil in Ohio ending that even surprised the show’s star.

The Devil in Ohio ending gets to the heart of the show’s themes and messages while leaving viewers wanting more. The ending asks Netflix viewers one major question: Is Mae an agent of good or evil?

Let’s dissect that Devil in Ohio ending and explore other topics presented in this limited series.

Warning: Devil in Ohio spoilers ahead. Proceed with caution.

What Happened At The End Of Devil In Ohio?

The satanic church begins to burn, which distracts the cult from their mission to sacrifice Mae. Abigail (Caroline Cave) stays with her, and Malachi (Tahmoh Penikett) sends Noah (Keenan Tracey) back to ensure that he remains safe.

Suzanne takes this opportunity to try to save Mae. However, Abigail continues to insist that Mae must make the sacrifice. Mae voices that she doesn’t want to die. She begs her mother to come with them. Instead, Abigail decides to stay and become the sacrifice.

Suzanne, Mae, and Noah get into a confrontation, but, ultimately, Mae and Suzanne escape.

Some time has passed, and now Suzanne is actively in therapy while Mae stays with her. It’s revealed that Peter (Sam Jaeger) and Suzanne are currently separated but sharing custody of their children. However, the girls are living with Peter.

He wants and needs Suzanne to figure out her issues and to get away from Mae. While celebrating Thanksgiving, Alex (Gerardo Celasco) calls Suzanne to let her know that the cult has disappeared. He also found Teddy’s (Ty Wood) truck, and saw some surveillance video that shows that Mae threw away the red roses and likely replaced them with white roses herself. This shows that Mae likely triggered her own reaction to the roses.

Suzanne sits down next to Mae, and then the camera zooms in on another location with what looks like a ritual done by Mae. It has a picture of Suzanne and Mae together.

Is Mae Good Or Evil?

In an interview with In Creative Company, Devil in Ohio showrunner Daria Polatin said that one of the main questions of the series is whether Mae is a force for good or evil. It’s a question that remains unanswered all the way until the end.

The Devil in Ohio ending very much states that Mae has been manipulating things in her favor. Clearly, she went to the cult in order for Suzanne to save her. Because we see that she probably did a ritual to try to use the power of Satan to bind Suzanne to her forever, it’s seems apparent that her goal was always to have Suzanne become her new parental figure.

When Noah and Mae have their final confrontation, he calls her selfish. He says she always put herself above the family. Mae is not as innocent as she appears and is a bit selfish. However, to call her evil seems like a simplistic view of someone who has clearly been traumatized by a cult.

I believe that Mae has done a lot of manipulative things throughout the TV series, but she’s not one of the great female horror villains – despite Madeleine Arthur taking inspiration from other cult movie favorites. Instead, she’s a girl who has been taught one way of life and maybe still holds on to many of those beliefs.

She’s also still a teen girl. Unfortunately, sometimes teens, or even just people in general, can engage in selfish behavior. Mae being selfish isn’t a sign of being evil, but a sign of being human. Also, Mae manipulating situations, and maybe harnessing the power of Satan, shows that Mae isn’t trustworthy, but it doesn’t mean she’s a monster herself. The Devil in Ohio ending shows that Mae leans more towards a devious path, but it likely stems from years of trauma, brainwashing, and abuse.

Suzanne should definitely not get comfortable with Mae, because she’s unpredictable, but labeling her good or evil seems to negate the fact that much of her behavior comes from trauma.

The Choice Each Mother Made

Devil in Ohio showcases the story of three mothers. None of them would get any mother of the year awards. It starts with Suzanne’s mother. She’s abused by her husband and allows Suzanne to endure similar abuse.

When given the chance to leave him, she decides to stay. This is the catalyst to Suzanne developing a hero complex with Mae.

The next major mother is Abigail, Mae’s mother. Ultimately, she also picks the abuser over her daughter. She decides that she must sacrifice her life for the cult to thrive. Mae also gives her a chance to leave but she picks Malachi and the cult over Mae.

The final mother is Suzanne herself. She also picks someone else over her family: Mae. She may try to justify it in a different way, but that’s what’s happening.

Mae is a complicated figure with a dark past, so it’s also like Suzanne picked someone who could potentially abuse her, maybe through emotional manipulation to keep her from those she loves.

During the Devil in Ohio finale, Peter makes a good point in saying that none of this is about Mae. It’s all about Suzanne projecting her need to be saved as a teen on Mae.

Suzanne even vocalizes this herself in therapy, but as the therapist addresses, just because someone knows their flaws doesn’t necessarily mean they can and will change.

In a Collider interview, Emily Deschanel offered more insight into her beliefs on why Suzanne picks Mae over her family:

Emily Deschanel does a great job of authentically portraying trauma from past abuse and how that can continue to affect someone’s life and decisions long after the abuse has ended. Mostly, Devil in Ohio is Suzanne’s story and how abuse can ruin lives for generations.

Why The Cult Storyline Doesn’t Wrap Up Neatly

Devil in Ohio is based on the book of the same name by showrunner Daria Polatin. In an interview with The Columbus Dispatch, Polatin reveals that she got the idea for the book from a true story told to her by producer Rachel Miller. She then wanted to free herself creatively by making it a fictionalized version of that account.

When developing the show, according to a MovieWeb interview, there was a lot of research and thought that went into creating the cult. Polatin even wrote a part of the cult’s bible. One of the reasons why cult movies are some of the scariest movies is that they’re often based on real cults or just the very real idea of them.

Cults can be anywhere, and their level of power and influence is unknown. Your favorite neighbor could be a cult member. That idea alone creates a sense of dread and terror.

Often, with TV shows and movies, we want a neat ending. We want the bad guys punished, the good guys to win, and everything resolved by the time the credits role.

Because Devil in Ohio is based on real events, with lots of research on cults, I believe the showrunner and writing team wanted to give a semi-realistic ending to the cult’s story. It’s not often that cults actually get taken down and justice is brought upon them.

Even when exposed, sometimes they’re able to continue to operate in the shadows. Therefore, the Devil in Ohio ending with the cult not being shuttered felt like a fitting and realistic conclusion, despite it leaving a somber impression.

Devil in Ohio continues to climb the Netflix trending charts, and rightfully so, because it’s definitely one of the best horror TV shows to binge right now.

Stream Devil In Ohio on Netflix. (opens in new tab)