Bitcoin and Ethereum crashed more than 10% at press time amid a marketwide rout as the global cryptocurrency market cap dropped sharply by 11.3% to $1.4 trillion.

Why It Matters: Selling pressure was high on Monday, especially with tech stocks, as investors shed stocks, bonds and commodities. The S&P500 fell below the 4,000 mark to touch its lowest level since March 2021.

While Bitcoin’s long-term fundamentals have remained unchanged, growth and recession worries have created a “very difficult environment” for cryptocurrencies, according to Edward Moya, a senior market analyst with OANDA.

“No one is looking to buy the crypto dip just yet and that leaves Bitcoin vulnerable here,” Moya wrote in a note, seen by Benzinga. ​

Macro headwinds aside, the cryptocurrency space is also facing another concern, according to GlobalBlock analyst Marcus Sotiriou.

TerraUSD (UST) lost its peg with the dollar after an alleged coordinated attack on the stablecoin, Sotiriou said. At press time, UST traded 25.26% lower over 24 hours at $0.74.

Even so, the analyst sees some positives in on-chain metrics, pointing out that the “percentage of Bitcoin which has not moved in a year is now at an all-time high.”

“This shows that the proportion of Bitcoin holders who are long-term HODLers is increasing, which is positive as it shows that short-term holders are selling to those with long-term conviction.”

If Bitcoin falls below $30,000 it will encounter very thin on-chain support, and the next important support zone is at $26,700, according to chartist Ali Martinez.

Cryptocurrency trader Michaël van de Poppe tweeted that the more he sees targets like $8,000 or $12,000 for BTC, the more convinced he is that “we’re getting into the end stages of this downwards run.” The trader said it’s a “tremendous opportunity” as the markets have capitulated already and altcoins are in a bear market for a year.

There’s plenty of bad news for anyone investing in the crypto markets, but it’s especially bad for people who jumped in at the peak. We got curious about exactly how bad returns on various crypto investments at various times in the past few years might be. For a wider picture, we looked at prices for Bitcoin, Ethereum, Solana, Terra, Dogecoin, and Shiba Inu. 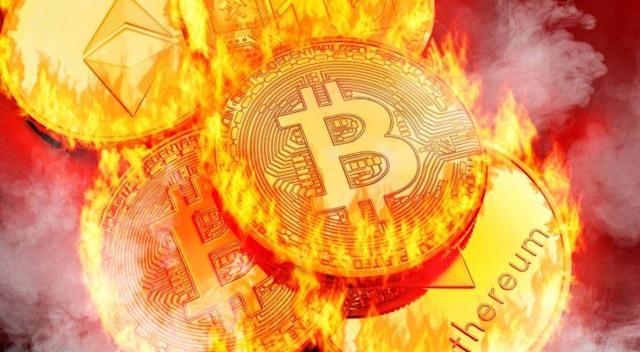 As you’d expect, long-term investors are still positive, even with this latest round of volatility. Here’s what that $1,000 would be worth today, for cryptos that were around at that time.

After a turbulent 2018, crypto markets began to climb again. Ethereum saw slow and steady growth to $301.40 and Bitcoin neared $12,000. Meanwhile, Dogecoin had made its way onto markets, though no one was paying it any attention at the time. Those that did, though, are still winning big.

The day after the WHO declared a global pandemic, Ethereum was trading at a modest $127.29, while Bitcoin was at $4,861.32. Dogecoin was still less than an afterthought for investors. That $1,000, though, would still have seen returns.

Investors were hot on crypto and prices were beginning their assent to the moon. Bitcoin hit $49,698.93. Ethereum was selling for $3,720.21. Dogecoin was up to 43 cents. And a new meme coin called Shiba Inu had just hit the market. For many investors, though, this is when that $1,000 investment began to look less wise. Here’s what it would be worth today.

Bitcoin hit its all-time high of $67,553.95 and Ethereum was near its best price at $4,635.94. Dogecoin was already on the way down, though, falling to just over 27 cents, while Shiba Inu was hitting its peaks. The $1,000, though, would generally have been better spent elsewhere.

It’s not just pandemic-era investors who have seen hits. Even people who bought as recently as a week ago have seen their $1,000 shrink. How much depends on what they bought.